Stravinsky's intriguing Violin Concerto is in the hands of Liza Ferschtman. Stanislav Kochanovsky leads this Russian concert of the Radio Philharmonic Orchestra, with parts from Tchaikovsky's Swan Lake.
Tchaikovsky's Swan Lake
The Radio Philharmonic Orchestra in a Russian concert, with a large selection from Tchaikovsky's Swan Lake . In this famous ballet, the swans are actually enchanted young women who can only be themselves at night. A prince hopes to make one of them his own, but evil forces work against him. This suite was composed by the young conductor Stanislav Kochanovsky. This expert in musical theatre and ballet music comes from St. Petersburg, where Tchaikovsky also lived for a long time. Kochanovsky was called a revelation by Bachtrack.

Liza Ferschtman plays Stravinsky
In her own Delft Chamber Music Festival, Liza Ferschtman has regularly given Stravinsky a place of honour. Now she ventures to play his intriguing Violin Concerto. Stravinsky hoped to write a 'different' work in this genre, without ostentatious virtuosity and fireworks. And he succeeded. This contrasting, neo-classical work is full of challenging rhythmic passages and lyrical lines. Liza Ferschtman in an energetic, humorous masterpiece. 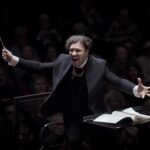